Eikon. The fall and the return XI

Eikon. The fall and the return XIX

Eikon. The fall and the return XX

The rupture of the human envelope II. The age of the aquarious 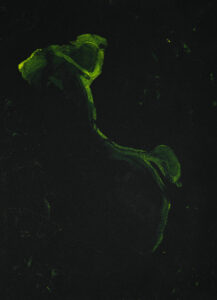 I think the thing that has always excited me the most is the fall of the color on the material support and my artistic research of the last phase starts from this meeting. I was strongly attracted in a minimalist way by the spontaneity of the gesture that leaves a trace on the canvas, the visible sign of something that is invisible; from there I continued all my research going from informal gesture, to informal material, to arrive at abstractionism and body printing, my last experimentation. I practice body printing, to recover the ritual dimension of making art, being one of the most ancestral forms of art that puts you in deep contact with the primordial part of Being. My every creation, apparently abstract and unrelated to reality, is instead the impression and the memory of a concrete gesture: for me the important thing is not what is represented in the canvas, but to leave my mark, my imprint, to act the artistic gesture.

When I paint I try to empty my mind as much as possible from thoughts, given my physical approach with art: in fact I use the whole body both when I do body printing and leave my imprint on the canvas, but not only, even when I realize my abstracts on canvas or my calligraphies on paper, I do not paint statically on the easel but with the support lying on the ground so that I can turn around , move as if I were dancing, because for me art is this: it is the direct expression of what the body communicates to me. The experience with theatre that I had in the years following my graduation helped me to listen more to my impulses and empty my mind from judgments to leave the space open to creative spontaneity, applying this method more consciously also in painting. So I owe it to the theater because it gave me a fundamental method and approach to artistic creation, which consists of being in a state of spontaneity and listening to inner motions. To do this you need physical training that prepares you at the action: this is the ritual that I practice every time before painting to predisposes me to "stay in the body" instead of "being in the mind".

The poetic of the symbolic crosses and connects all my artworks of the last period: the works inspired by Japanese calligraphy and other types of writing such as Arabic one are made not with the intention of reproducing already existing and codified symbols but with the intention of processing my own calligraphy, a sort of automatic writing, a body dance that sees in the brush the prolongation of the body; even the automatic drawings are inspired by this principle in which I translate on the support all my inner motions, the motions of the soul communicated through the body, as if it were a kind of electrocardiogram that brings back to the outside the rhythm and internal movement. In fact, although in these drawings, unlike all my production, there may be references to the figurative and something recognizable and realistic may appear, I do not start with the intention of drawing something that I see, but on the contrary, I act in this automatism, in this transposition of my impulses and from there an image is imposed on me, so the process is not "first I see and then draw", but "first I draw and then I see". In body printing work, there is a kind of large-scale transposition of what happens in the small when I make my automatic drawings or my calligraphy. In these works, however, the body is not only an instrument that acts as a medium, but is also an artwork, an object on which to carry out artistic operations and a subject that gives shape to the artistic message. The common thread of all these types of works is also expressed at the stylistic level with a kind of lightness in the trait and gestures, which wants to be a symbol of the lightness of being, "that unsustainable lightness of being" of which Kundera speaks in his novel and which contains in this all the oppositions. Even the body printing works, through these imprints given by the body that makes brush but at the same time falls as if it were a stain of color, express this oxymoron and the fluidity of the dynamic movement of life, which is a continuous evolution in which we come into the world incarnating to leave a slight trace that is dissolving towards the infinity from which it has come and to which we return. The body is therefore configured as a visible symbol that refers to the invisible, as something that is limited and at the same time condition of possibility of manifestation of infinity, as a real medium between the material, carnal and sensual dimension and the spiritual dimension of infinity.

The artwork I have shown in this exhibition is a part of series entitled "Eikon. The fall and the return", which I realized with many prints of my body starting from a more saturated and charged one, dissolving towards an increasingly imperceptible prints, expressing the concept of the body as an icon, a royal door towards the invisible. The fall and the return symbolize the human condition and the ambivalence that the human being continues to feel. I think it is an intrinsic characteristic of the Being to feel the weight of the fall, the weight to stay in the world, the bond to something that keeps him attached to the earth, and at the same time the thrust that leads it towards spirituality, towards a lightness and a dissolution, towards the infinity from which we come from and towards which we return. I used the pigment in powder looking for the balance of the moment where the pigment get loose to show the material we are made, to show we are stardust. Indeed the material of this body is the same powder of the background to express the message that there is no dualism between visible and invisible, body and spirituality, energy and matter, but They are one the symbol of the other one.

Subscribe to our newsletter below and never miss the latest news .

We use cookies on our website to give you the most relevant experience by remembering your preferences and repeat visits. By clicking “Accept All”, you consent to the use of ALL the cookies. However, you may visit "Cookie Settings" to provide a controlled consent.
Cookie SettingsAccept All
Manage consent

This website uses cookies to improve your experience while you navigate through the website. Out of these, the cookies that are categorized as necessary are stored on your browser as they are essential for the working of basic functionalities of the website. We also use third-party cookies that help us analyze and understand how you use this website. These cookies will be stored in your browser only with your consent. You also have the option to opt-out of these cookies. But opting out of some of these cookies may affect your browsing experience.
Necessary Always Enabled
Necessary cookies are absolutely essential for the website to function properly. These cookies ensure basic functionalities and security features of the website, anonymously.
Functional
Functional cookies help to perform certain functionalities like sharing the content of the website on social media platforms, collect feedbacks, and other third-party features.
Performance
Performance cookies are used to understand and analyze the key performance indexes of the website which helps in delivering a better user experience for the visitors.
Analytics
Analytical cookies are used to understand how visitors interact with the website. These cookies help provide information on metrics the number of visitors, bounce rate, traffic source, etc.
Advertisement
Advertisement cookies are used to provide visitors with relevant ads and marketing campaigns. These cookies track visitors across websites and collect information to provide customized ads.
Others
Other uncategorized cookies are those that are being analyzed and have not been classified into a category as yet.
SAVE & ACCEPT